The Significance of Iron Chelation Therapy in Lower Risk MDS

INTRODUCTION
Myelodysplastic syndromes (MDS) are clonal, hematopoietic stem cell diseases which are predominate in an elderly population and present with a variable cytopenia in the presence of a generally cellular bone marrow. An important prognostic determinant is the risk of progression to acute myeloid leukemia (AML) which happens in approximately a third of the cases. The Revised International Prognostic Scoring System, or IPSS-R, is the gold standard which is used to stratify patients into those with lower (very low, low, or intermediate risk) or higher (high, very high) risk disease. Treatment is more aggressive for those with higher risk of transformation because their survival is shorter, but for those with lower risk disease, a longer survival is almost invariably marked by worsening cytopenias along with a need for repeated transfusions which then puts them at risk of iron overload. In fact, iron overload is to be taken seriously after as few as 10 transfusions (or 20 units of blood) if accompanied by a ferritin level which is consistently higher than 1000 mcg/L. Recent studies suggest that transfusion dependency and iron overload can impact survival, and it has been estimated that every 500 mcg/L increase in ferritin above 1000 mcg/L is associated with a 36% increase in risk of death. Therefore, iron chelation therapy (ICT) should be considered for lower risk MDS patients who have received at least 10 transfusions and whose serum ferritin is higher than 1000 mcg/L. It should be noted that no prospective clinical trials are available to determine an independent effect of chelation on outcome. However, common sense dictates early institution of ICT in lower risk patients because transfusions are likely to be the backbone of therapy for them, either continuously if they fail to respond to therapy, or sporadically even if they have intermittent responsiveness. Iron chelation therapy has been associated with multiple benefits, in addition to decrease in iron overload, such as improved cytopenias.

The following example is used to illustrate the importance of ICT through a case study describing the course of a lower risk MDS patient.

CASE REPORT
A 71-year-old white female presented with fever, excessive weakness, and fatigue; CBC showed normal WBC and platelets with an Hb of 7.5 gm/dL. A bone marrow examination was performed and revealed a diagnosis of MDS, refractory anemia with ring sideroblasts (RARS), no increase in blasts, and normal cytogenetics. Genetic profiling showed a somatic mutation in SF3B1 (K700E). Her serum ferritin was 860 mcg/L without any history of a blood transfusion.

High ferritin in MDS patients without blood transfusions
Many MDS patients present with a higher than normal ferritin level because of dysregulated erythropoiesis and iron metabolism which is not entirely well understood. Ferroportin is the only known iron exporter present on the surface of all cells involved in iron flow (macrophages, duodenal cells, hepatocytes, etc.). Hepcidin, a liver derived peptide hormone discovered in 2000, binds ferroportin on the cell surface and causes it to be internalized and degraded so that increased hepcidin leads to increase in ferroportin degradation, which in turn inhibits absorption of dietary iron and iron release from macrophages. Hepcidin is thus the master negative regulator of iron homeostasis. Clonal expansion of erythroid cells and ineffective erythropoiesis suppresses hepcidin, and when hepcidin is low, ferroportin is not degraded, leading to iron overload.

In RARS, the magnitude of ineffective erythropoiesis is higher than other MDS subtypes because iron is trapped in mitochondria and not available for incorporation into heme. Mutation is the splicing factor gene SF3B1 is found in ~60-80% RARS patients and is associated with low hepcidin and parenchymal iron overload. Serum ferritin can thus be high without a transfusion for all these reasons.

Initial treatment plan
The patient was given a blood transfusion, and since serum erythropoietin (Epo) level was less than 500, she was started on recombinant Epo treatment to which she responded for almost 6 months and then eventually became transfusion dependent again. She had a washout period with supportive care only and then was treated with lenalidomide. She failed to respond and the drug was stopped after a 4-month trial. During this entire time, she was receiving 2 units of blood every 2-3 weeks. Her serum ferritin was now ~1000 mcg/L and she had received 22 units of blood. At this point, she was diagnosed with a
fungal infection.

Presence of a fungal infection 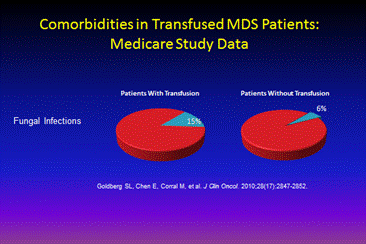 Infections are second only to cardiac events as a cause of death in lower risk MDS, and as shown in the figure, incidence of fungal infections in MDS are significantly higher in transfusion-dependent patients. This could be due to the fact that certain organisms are siderophores and will grow well in iron rich environments and could explain the fungal infection in our patient. In fact, infectious disease experts now use ICT as an adjunct to antimicrobials in severe cases of fungal infections like the zygomycoses. 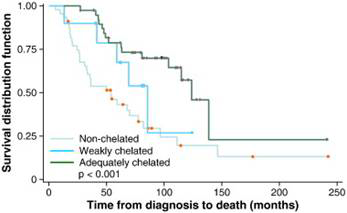 The patient was advised to start ICT. There are three drugs available for ICT, one is parental (deferoxamine) while two are oral (deferasirox and deferiprone). The patient was advised to start on deferasirox because a retrospective study comparing deferasirox and deferiprone in transfusion dependent lower risk MDS patients confirms superiority of the former in terms of higher efficacy and a milder toxicity profile. It should be noted that deferasirox is frequently associated with gastrointestinal side effects and it cannot be administered in patients with renal failure. Our patient started deferasirox but gave it up after a month due to GI side effects, and no amount of counseling changed her mind. Her transfusion requirements worsened and after another 6 months, she agreed to try another disease-modifying agent. She was started on a hypomethylating agent (HMA) which was continued for 9 months but with no real improvement in her transfusion requirements as she continued to receive 2 units of blood every 2-3 weeks. After approximately four years of diagnosis, the patient had received upwards of 75 units of blood and her serum ferritin was greater than 6000 mcg/L, but she was still not taking the prescribed ICT with any regularity. She was instructed that even intermittent chelation is better than no chelation, as shown in the figure (Blood Reviews, Volume 25, Issue 1, 2011, 17 – 31) but she still refused. Eventually, she presented to the emergency room with heart failure, atrial fibrillation, and a heart rate of 160. She was admitted to the ICU and stayed there for 6 weeks fighting for her life. According to our cardiologists, hers was a case of severe iron overload leading to cardiac complications. At this point, the patient was started on both intravenous and oral chelation therapy. Studies in thalassemia show a synergy between deferoxamine and deferiprone and this is what she was given. She slowly improved and was eventually discharged after an additional 4 weeks in the hospital. She was then maintained on subcutaneous and oral chelation and is back to work. The aggressive ICT has improved her anemia so that now she is receiving blood every 6-7 weeks. Benefits of ICT have been reported in retrospective studies. The majority of deferoxamine-treated patients reduce RBC transfusions by 50%, and 46% achieve complete transfusion independence. Deferasirox increased Hb by 1.5-1.8 gm/dL in addition to a decrease in transfusions. It appears that ICT ameliorates the pathologic effects of iron overload by decreasing iron induced cytotoxicity, DNA damage, blocked differentiation, and transformation to leukemia.

CONCLUSIONS
The disease-modifying agents available for treatment of lower risk non-del5q MDS patients have a response rate inducing transfusion independence that ranges between 17% for HMAs to 26% for lenalidomide, and the duration of response is approximately 40 weeks. This means that the majority of patients are maintained on supportive care which includes recombinant growth factors and transfusions. Repeated transfusions lead to iron overload which is suspected when serum ferritin is higher than 1000 mcg/L and the patient has received at least 10 transfusions (20 units). The simplest method to measure iron overload (IO) is serum ferritin, but more reliable techniques such as T2* MRI (liver and heart) need to be carefully studied. It is appropriate to initiate ICT when SF is higher than 1000 mcg/L or T2* MRI LIC 3-4 mg/g of dry weight. Serum ferritin levels should be performed monthly to monitor the efficacy of ICT and T2* MRI should be repeated after every 10-20 PRBCs. Data from multiple retrospective studies demonstrate that ICT results in improved Hb, reduced transfusion requirements, and marked survival benefit in lower risk MDS patients, and though retrospective in nature, introducing the possibility of patient selection bias, it is better to err on the side of caution and institute early chelation in transfusion-dependent patients to avoid the life-threatening scenario faced by the patient described here.

Steensma DP, Gattermann N, When is iron overload deleterious, and when and how should iron chelation therapy be administered in myelodysplastic syndromes? Best Pract Res Clin Haematol. 2013;26(4):431-444.